Jim heads for the top of the charts

Jim Radford, who, together with local singer-song writer, Keith Ferris, runs the regular folk sessions, The Travelling Shrewsburys, here at Shrewsbury House, has just released a single that has shot up the Amazon Music Charts knocking Justin Bieber and Ed Sheeran off the top spot. 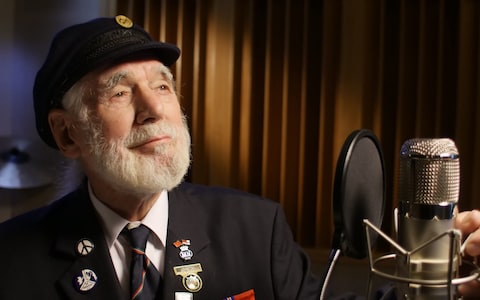 Now aged 90, Jim is thought to be the youngest crew member involved in the D-Day landings. He was 15 at the time and the memory of the things he saw that day have stayed with him all his life. It was his first trip to sea.

Jim wrote "The Shores of Normandy" in 1969 after seeing little children playing on the beach where he had witnessed so much death twenty five years earlier. It was the first time he had been back. He is donating all the profits from the single to the construction of the British Normandy Memorial that will be inaugurated on June 6th 2019 - the 75th anniversary of D-Day.

Already top on Amazon, let's get Jim to the top of the official UK singles charts by June 6th. You can download "The Shores of Normandy" on Amazon, iTunes or anywhere you usually buy your music.

Jim and Keith will be back at Shrewsbury House on 14th June.